Dr thinks the problem with my foot is morton's neuroma. Bussed - masked the whole time of course - over to South Bristol Community Hospital for an x-ray last Mon, just to make sure it's nothing skeletal - it isn't, all that showed up was the healed metatarsal I broke dancing barefoot at a disco at Uni - so now have to wait for another ultrasound scan, which could take months as they're backed up with everything else that's happening. In the meantime picked up a pack of supports (expensive given I only need the one, but they do work and I can wear them with sandals, so that's a big plus). Good news is I can, just, get on my driving shoes, so can restart Kai's driving lessons hopefully this weekend. He's now very keen to start driving properly, so will make it a weekly thing (if not more often if I can find somewhere safe for him to practise...)


Forgot to say we also watched Kung Fu Panda 1, 2 and 3, all of them amazing, inclusive, and with wonderful lessons to (unconsciously) teach the watcher. Very glad I bought them!


And I treated Tyjer to one of these fountains after reading that cats are reluctant to drink out of bowls as in the wild it means the water is stagnant... or summin... Anyway, although we haven't seen him use it, from the number of times I've had to top it up, and the contents of his litter tray, it looks like he's enjoying it!

Oh dear, it's getting longer and longer between posts...


Sorry about that. I guess I'm still trying to recover.


Anyway... It's all much the same as it was before - Ken's still working from home, and may well be into next year if the warning of a second winter spike of Covid-19 comes true, Kai's working on projects and helping me weed, when my back permits it. Front's not too bad, but the back garden... I shall be seeing about getting a couple of guys from the Neighbourhood Group to come help in a month or so, it's beyond us now. If we can get it down to a copable level - and block the foxes from coming back - Kai and I between us should be able to keep it under control, certainly over the winter.


We've been watching a lot of stuff...


The Jungle Book - the 1967 film, a lot of fun, and the 2016 Jungle Book, also a lot of fun. It's difficult to compare the two as they're quite different, but both are enjoyable.


Moon 44, which is... bearable, I suppose. Didn't help that the sound cut out at minute 30 and didn't resume until minute 32, which meant we missed a vitally important bit of conversation, but ah well...


Carousel, which, quite frankly, we all found instantly forgettable - with the obvious exception of "You'll never Walk Alone" (didn't know it came from this!). Pity, but there we go. There weren't even any particularly likeable characters in it.


Revolt, which despite feeling like a pilot to a series, was actually not at all bad.


High Life, which is absolutely extraordinary. Not an easy watch, but a damn fine film.


Ken and I have been working our way through Legends of Tomorrow; we're about to finish season 1. Kai has opted out, as he remembers most of the first two seasons, which is all we had until I bought season 3 and 4. He'll watch the end of season 2 with us before we start season 3. By the time we've finished (and I still need to pick up season 5) it'll be time to start Deep Space 9 (now have all seven seasons. Should keep us going 'til Yule...)


You remember last August we had Anglian replace the soffits, fascia and guttering (to stop the black mould spreading into the house)? They did a fantastic job. Even through last winter's storms it stood fast, no leaks, not even drips. Well, since then BND has had workmen on at least two occasions working up ladders at the back of the house, and now, suddenly, the space between his gutter and ours is leaking. And he's accusing us/Anglian. It's obvious his cowboys have caused the damage. He could have had it fixed - I clearly heard the last workman say he could seal it with some mastic, but noooo, the toxic old bugger wants to blame us. As it happens, it's less than a year since the work was done, so Anglian will probably repair it for us, but I have made a third complaint to the police anyway, as I don't see why he should get away with his appalling behaviour (he's also taken to standing up on the slope at the top of his garden glaring at Kai and I while we're working, I assume as an attempt at intimidation. I just ignore him, but it disturbs Kai). We have a PC Ayers calling at some point. In the meantime I've moved the voice recorder app on my phone to make it easier to record him - with due warning, of course - if he starts anything. I think it's about time to find out the costs involved with taking legal action against him. We've had six years of his crap and I've had enough. 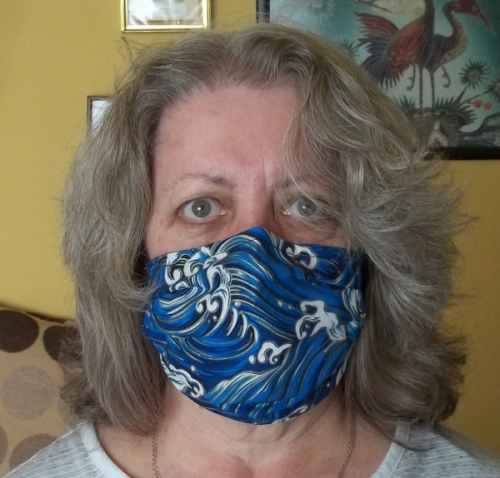 Mask by Kirsteen Wythe on Etsy. Hair hasn't been cut since last Yule - will see if I can get an appointment before 2021!


Hopefully there'll be an update sooner next time...

# Joules *Dances with Haddock* Taylor pontificated this at 12:01 pm

I think I have the same problem with my foot caused by an ill-fitting lining in my shoe a while ago. I quite literally feel your pain... :) But good to hear they're looking into it, even if it does take a while.

I'm sure Anglian will fix your problem (if only they could fix the source of your problem!) and might be able to tell you what went wrong - i.e., was it sabotage? Good luck with that - and why, pray, do you need to tell him if you record him? Abuse directed at you in your own property should be good enough reason.

I'm having to look into masks now (not very happy about it). Work will provide for me while I'm there, but if we want to go anywhere else we'll need our own. Shops were disappointingly empty today but I've got some material with the intent of making my own :)

Ow symps!! Not at all nice.

Unfortunately, recording someone without their knowledge, unless you're a spy or undercover cop, is borderline illegal and cannot be used for legal purposes. But he now has a third complaint against him in his police record, and I'm very tempted to cancel Anglian and make him fix it it himself, since his effing cowboys caused the damage. I'm certainly not paying for anything.

You can get used to masks surprisingly quickly, but always carry plenty of tissues as they do get a bit hot underneath. Ours are double thickness and we put triple thickness washable filters inside, which makes them hotter but gives us better protection. Haven't come this far to be careless now.

Fingers crossed for the Oxford vaccine...

Symps to both of you for foot issues. Not nice. Good luck with the guttering, whatever you decide to do.